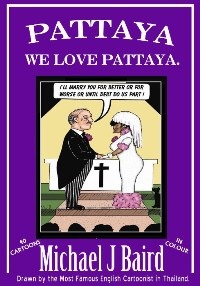 Cartoons that reflect life in Pattaya, Thailand, and the humorous side of it.About The Author.Michael is originally from England and now lives in Pattaya. Although many may not recognize his name, most will recognize his initials, MJB, as they appear on the cartoons about living or visiting Thailand that he draws for the Pattaya Mail.Cartoonist Mike Baird got his start at a young age. His older brother did drawings and he took some to school and showed his classmates. His classmates liked them so much, they wanted to buy them. So, Michael took them back home, drew copies, and brought them back to school for sale.Early in his career, he traveled extensively as a touch up artist. Since the displays used oil paint, the panels often stuck together. When they were put up for display, they were smudged and needed to be touched up.Michael had always been impressed by the art work of Norman Rockwell and started making copies of his work. This led to a side career as a copyist; not only of works by Rockwell, but other famous artists as well. He became one of England’s top copy artists painting murals, portraits, landscapes, and masterpieces.However, Michael did his first cartoon after retiring to Thailand. He was approached by a magazine publisher and asked to draw some cartoons. His first efforts were in black and white. Over time, he improved his drawings and started doing them in color. These cartoons most often reflect life in Thailand – the humorous side of it. Most of his inspiration comes just from sitting and watching what goes on around him.Michael’s website is mikebairdcartoonist.simplesite.com. He also offers three downloadable guides (bars hopping, hotels, and restaurant).Moving to Thailand was the best thing he ever did.